The conflicted mercenary and the tail of the tiger

I didn't think they'd trust me. Certainly not at first given my somewhat chequered and difficult past.

Now there's an understatement if I ever heard one, even though I'm only telling myself that crock of... spin. At least that particular turn of phrase is running more easily through my mind, and I might soon start to believe it.

That isn't what brings me into HR 706 though. I'm following a hunch.

The focused battle at Kui Hsien left me angry and drained. That Senator Patreus sold the survivors into slavery as a business decision was something I had not anticipated. The mercenary in me was paid, but the conscience did not rest so easily.

The next contract didn't quite fall into my lap the way they normally do either. A GalNet news article on the Emperor's assassination attempt, and a call for assistance in investigation from the Princess Arissa Lavigny-Duval in a nearby system.

Only two jumps from the carnage I left behind in Kui Hsien. Two jumps from Eotiensis, the home system of Senator Denton Patreus. And finally, with the Senator's patronage of HR 706, I feel I am only two jumps away from making a connection with the Emperor's assassination. 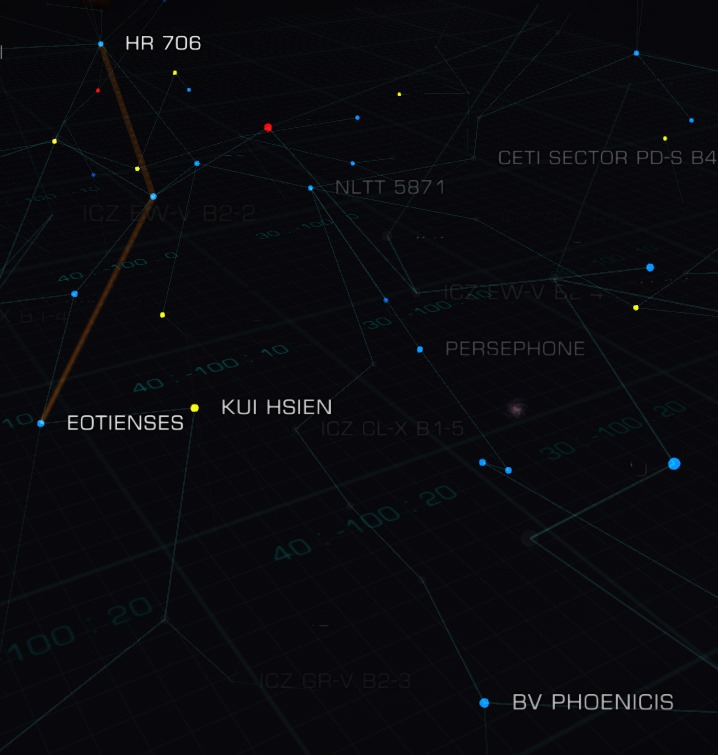 Patreus would not be the first ambitious Senator kept young by the longevity drugs that are the favoured of the rich. Nor the first to have laid an envious eye on the highest position of power in the Empire. Such thoughts against a Senator who has declared himself loyal to the Empire would also be treasonous in their own right, and they are buried deep while I play a dangerous game.

So I find myself in a resource site of a nearby system, helping to calm the criminal elements in this nearby sector of space. Listening to the lawless go about their business and gathering transmissions, data on time and location, and then finally their bounty as well. Sifting and searching on my own meagre resources before feeding it up to a much larger organisation with wider reach and better capabilities that I could ever muster.

Hoping to find a tremor on the spider's web of deceit that leads me ever further on. One of us will see it first.

The data processing techniques of the Princess have impressed. A rapacious thirst for knowledge that can correlate data at that pace would raise eyebrows and could even have constrained AI capabilities. Though it is no straightforward task to keep them occupied and distracted with puzzles to solve. At the moment it pays to be indifferent to these things, and it certainly wouldn't be healthy to inquire further.

I'm not entirely sure that I'm trusted yet, but I know they're willing to accept the discerning information that I bring. Some do occasionally seek me out for my skills and contacts, but this time it is given freely with an ulterior motive on my part. The mercenary inside me is most satisfied however, for the pay is very good indeed.

Another payload of data dropped off at Laming Orbital. Another paycheck. But still nothing that satisfies.

The GalNet news overflows with speculation once the HR 706 chapter of the Emperor's Grace was found by the Princess to be operating without sanction. Though their protests to the Senate did delay these findings, as the guilty are wont to hide behind the protection of process and assumption of innocence, it did buy time for another operation to complete.

Any leads that might have led there from HR 706 and then back into the adjacent system of Eotienses, home world of Senator Denton Patreus, have now been utterly decimated. Its people scattered to the corners of known space as slaves where they have no voice, and no presence.

The business decision to sell the assets of Kui Hsien now makes perfect sense. It severs a connection.

That the Senator did eventually intervene to allow the investigation into HR 706 goes a long way to establish credibility and distance from what might be discovered. However when there are conspiracies inside conspiracies then the assassins are themselves ultimately expendable.

For now the trail has chilled beyond my ability to follow.
Posted by Unknown at 22:26