It very much depends on who you listen to, or want to believe. Factions within the Federation are each telling wildly different stories; with an investigation that seems to lead to more questions being asked than answered.

So I have to go there to investigate on my own.

Dropping back into normal space in Azaleach finds it busier than usual. Much busier. A small cluster of ships break out of tight fuel scooping orbit around the sun, and begin the 20,000Ls long run out to Leoniceno Orbital. Two more ships jump in and turn immediately, apparently more confident in their remaining fuel, and follow close behind. 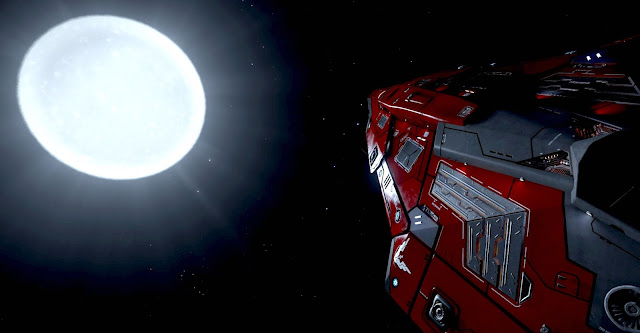 “12 hours ago, following entry into hyperspace, Spaceflight One went dark. All attempts by the President’s security team to trace the vessel have met with failure.” - Secretary of State, Felicia Winters.

Missing! They can't find the ship.

The system is huge. Azaleach B and C stars glimmer faintly, orbiting each other and barely visible at over 220,000Ls away. They almost, but not quite, fall into the background of nearby stars. They've already been picked out by an advanced scan of the system along with their orbiting asteroid belts so there's no problem finding them.

It's a damn trek out there to go take a look, and precious little chance of finding anything. 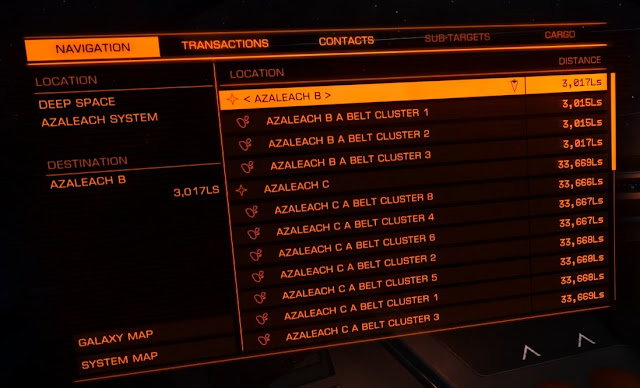 "We exited hyperspace uncontrolled and in deep space – something I’ve never seen before... We first searched the deep space around our positions, then jumped to the destination point rendezvous as quickly as we could. Nothing. Not even wreckage.” - anonymous escort of Spaceflight One.

A misjump then into a dark and uncharted volume of space and lucky to get back out alive. Almost unheard of these days with the safety features built into these drives.

How exactly do you force a misjump? 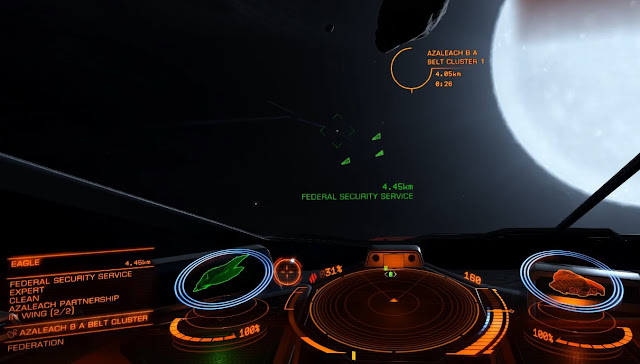 The system is full of security patrol ships as the system is in a state of semi-lock down. Searching for a piece of wreckage, a transponder, any signature that could be Spaceflight One. Any clue on what happened.

There's nothing here to see, and nothing found. They are searching in the same way that I am. They carry a hope of finding a clue that others might have missed, and have a palpable sense of something most definitely lost.

Having ensured that the tumbling rocks around Azaleach B remain protected these two security ships jumped out.

The background to these events don't stop some of the wilder speculation making it out onto the comm nets either.


“Learn your history, people. It wasn’t all that long ago that our ancestors were being plucked out of the black right into the belly of bugs ... Weird, pulsing, alien things. I don’t know where they came from ... You think it’s a coincidence that the President went missing just weeks after those THINGS turn up?" - Alex Snoori, host of Beyond Top Secret.

This one sounds like the rantings of a conspiracy theory.

Except for one thing.

When you do go a check your history books it's clear that Spaceflight One made a detour that took it within 300Ly of a known base of operations for the Thargoids.

There, I've said it. I'm almost ready to buy into something as imaginative as that. The history books are full of commanders that went missing, and some that even came back with wilder stories. Jameson himself claimed to have survived more than one witch space encounter, bringing back technology that would have made its way into the research laboratories.

"But the idea, the very notion, that our best and brightest out there on Starship One would have let that bird fly with a busted engine... No way. Those guys are military. We need to be looking for who did it. We need to nail them NOW. The assassin is busy covering their tracks while we speak." - Shadow President Hudson, Federation Congress.

The Shadow President seems certain it was an assassination. Is he grasping at straws, or does he have some inside track?

In any case the call of a vote of no confidence in the President, missing and believed dead, is brutal and callous. With Vice President Naylor also on board Spaceflight One (against all the usual travel conventions for senior leaders) there is no-one to answer to the vote, or hold to account should it pass. Hudson is making his powerplay and the Secretary of State is meekly letting it go ahead.

“Starship One’s disappearance appears to have been caused by a major malfunction in the Frame Shift Drive’s safety systems. It looks like there was a major power surge, followed by four separate system failures in quick succession according to the data we have, resulting in a catastrophic explosion. We do not believe this explosion would have been survivable by anyone on board.” - Lieutenant Barringer, Federal Transport Safety Administration

The story has changed. As they were originally searching for a missing ship, then the catastrophic explosion must be inferred from the consequences of the system failures. I keep on coming back to the question of how to perform a mis-jump. Was it a deliberate act of ... intent... or sabotage?

Perhaps Hudson was right about such an accumulation of chance being malicious: the Federation leadership on one ship, the power surge, the sequence of safety system failures...

Neither the Empire nor the Federation now has a credible and unifying leadership to maintain the peace, and the known human space is accelerating into a turmoil not seen in recent history. Major powers fracturing along internal divisions of ideology and ambition, and openly competing for hearts, minds and territory.

What really happened to Spaceflight One?
Posted by Unknown at 16:43