An act of strategy

An anaconda rumbles overhead, slowing under navigation guidance and nudging off the centre line towards a large landing pad. It twists to line up against the blinking focus of guiding lights, and for a moment there's a clear view of melted metal battle scars around the power plant. A battle hardened ship and fresh in from combat.

That one will be in repair for a while.

Direct line of sight with the Vestigial Echo is interrupted for a moment while the secure comms channel reacquires from a partial lock. Although it is difficult to intercept direct line of sight comms, this also makes it sensitive to what is happening in the surroundings. The pulses from the anaconda's thrusters are distorting the beam path and the software struggles to stabilise the data stream against the disturbance.

A monochromatic hand pointing at the data map flickers and de-rez's for a moment, and the sound breaks up like something is struggling to breath while gulping in water. 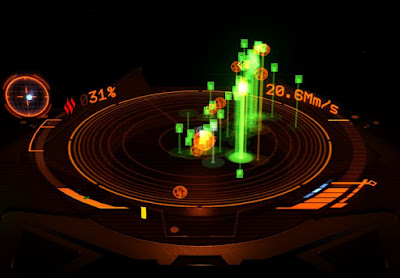 The Quivira military planners have given the Pilots of the Federation a relatively free reign to come and go at whim. The usual combat missions for a war zone are available on the bulletin boards, about the only advice on where reinforcements are needed and pointing the way to where combat zones have spilled up within close orbit of the nearby planets.


Scouts find a small group of enemy ships that are awaiting reinforcements in an unidentified signal source. If the scout escapes then an attack fleet is assembled from nearby forces and, guided from the intel, jumps in for an assault. The reinforcements that were called for arrive though not always in a timely way that can sway the battle decisively, and so the intensity ramps up to a bloody furball.

System wide tactical scanners identify the volume of space from the arrival of ships and outpouring of intense weapon discharge. The unmistakeable signature and number of power plants losing containment will mark it as a combat zone. 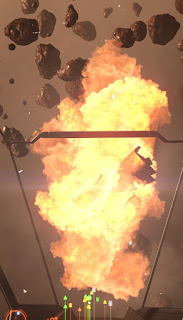 A profile emerges and battle lines are drawn. Appear strong where you are weak. Show weakness where you are strong. Moving to shore up this battle will hold those loyal to the whim of Patreus at bay. Applying an overwhelming force over there to force a local retreat that draws enemy forces away from elsewhere to create a weakness.

Time and only time allows more civilians to escape to relative safety.

The convoys of civilian ships leaving the station need protection and a chance to escape to adjacent systems. A nearby combat zone looks likely to spill over and allow the forces of Patreus to gain control and expand out into supercruise. That would dominate intersystem travel and lock down reinforcements.

The hologram rendering of Gearwright moves around the small tactical display and points at a volume of space around Quivira One. A natural staging area for ships jumping into the system that don't have capital ship assistance.

Gearwright and I are in agreement that this is a worthwhile place to apply effort to a containment operation.

The ship's computer chirrups the arrival of a message and, with a short nod from me, summarises its content.

Pulling up the manifest and looking at the restock ETA for the Debitum Naturae raises a groan, and it's taken longer than originally estimated to find some shield cells for my Vulture. Credit where it is due though: the Quivira system government have opened up their stockpiles of ammunition and essential combat consumables to the pilots that have signed up. Those crews are very much overworked and will probably stay up until the end, on the understanding that their families departed to safety first. Brave souls.

An opportunity to talk about secure communications then. I must admit to not being too happy about the content of the private message from Gearwright that brought me here. It contained location details and a holiday invite to a system known to be in trouble with Patreus.

The conversation is short and Gearwright listens patiently. It's been a while since I've done this and the message cleanup protocols for secure comms over a channel that is assumed to be monitored and broken are a bit rusty.

"...And so the use of imprecise language and strong hints of past conversations will obscure the message to a heuristic scan. When our previous engagements with an adversary are a known factor then a system with known adversary activity will raise a flag."

"A few tweaks here and the message has picked up a banality that should look like a natural banter between friends, rather than a statement of intent."

The hologram flickers and dies again as another ship passes overhead, though I'm pretty sure that the corner of his mouth tightened up in a smirk first...
Posted by Unknown at 20:16