The quiet before the storm

There was too much at stake.

Lugh stands as a dark reminder of why we talk first. Of why we listen to each other. It is a civilised way to resolve and compromise on differing view points. Much can be achieved without shedding a single life.

The Federation is holding on to all who fall under its protection. Many are united under one banner and welcomed with open arms, and it is so very... very... easy to join. Though once discomfort grows, and circumstances change, it can be found that there are no rules on how to leave. No way to step back outside and say "Thank you, but this is no longer what we want."

When leaders and diplomats fail to find a way then there is a civilised war. One that has rules. Where commitments are made and binding contracts are entered into.

Tonight I feel a little cheaper in my soul; in a place where the alcohol cannot dull the pain. Whether signing up to fill your wallet, or protect those you love, the risks are known and understood. Those who have died up until now knew the choices they were making.

Over 9000 civilians dead. Federation civilians in the wrong place. Dead by the hand of their own government.

A civilised war would call that a crime. 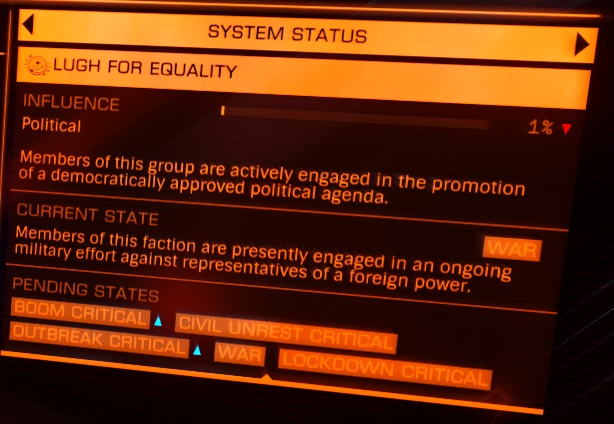 The Crimson State Group are desperate enough to take a merc who has fought and killed many of their own. Under contract of course.

Though I may have lost sight of what is right I do still know what is wrong.